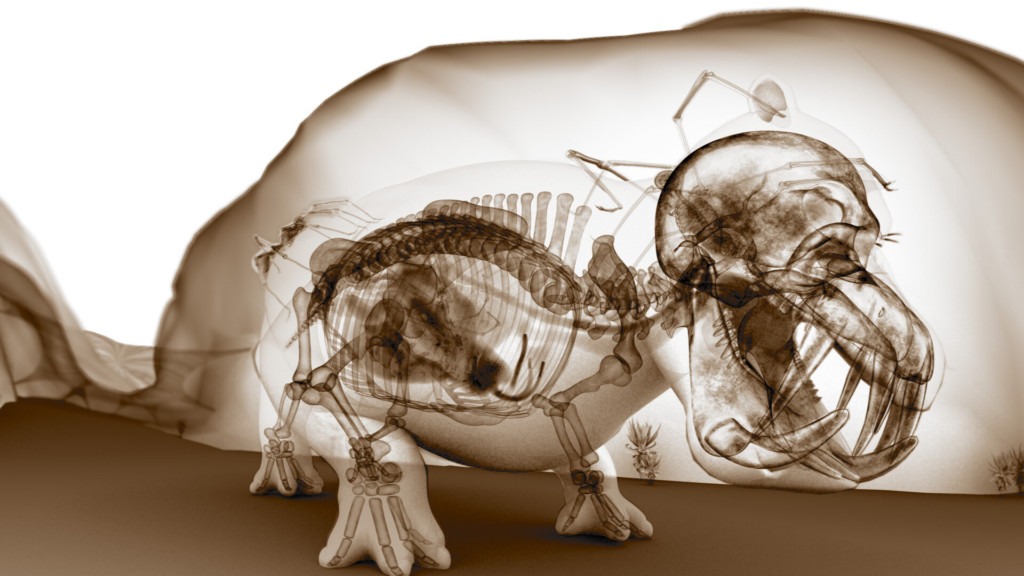 We had the opportunity to ask director Brian Andrews about the project.

The creatures of Hominidae were first created in 2004 as a series of photo-composites built from human and veterinary x-ray films. Alternative human evolutionary possibilities were explored as radiographs of humanoid anatomies. Compositionally the images address the hominids with scientific lucidity, yet maintain an emotion of vulnerability as the figures betray the contradictions of their physicality. The series was exhibited internationally, including at SIGGRAPH, in the Hong Kong Exhibition Center, and at numerous galleries.

Based on the photo-composites, a CG animated short Hominid was produced in 2012 telling a story driven by the transparent biology of the hominids. After premiering in the Electronic Theater at SIGGRAPH Asia, the film went viral in online distribution and film festivals, culminating in strong coverage in both the entertainment and scientific press. Current developments in virtual reality technologies have inspired a return to the world of the hominid. The unique visual environment of Hominidae is intrinsically suited to the immersive experience of virtual reality storytelling. As the embodied medium mirrors the visual transparency of the environment, viewers cultivate empathy with the humanity of the hominid’s life and struggle for survival.

To visually compose a story in 360 is very different than for a traditional film. If you want the audience to focus on a specific point for the story, you can’t just cut to it in the edit. Rather you have to lead the audience’s attention with movement and sound and draw their eye where you want it to go. Coordinating this delicate dance required months of trial and error composing a 360 immersive animatic visually synchronizing the story.

When we entered production all of the artists had to overcome the challenge of using traditional flat-screen tools and translate them for producing immersive content. There is no real established pipeline for cinematic VR 360 video, so the team had to hack and modify tools all the way through the process. Every step required looking at how to best reach our goals with technology that needed to be adapted to create our vision. The film was animated in Maya, rendered in Vray with Qube, composited in Nuke using the Cara VR plug-ins, and edited in Premiere. Audio was mixed and spatialized in ProTools using the Facebook 360 Spatial Workstation plugin.

What’s next for you?
I’m working on an animated AR audio experience.

Hominidae is available in the FIVARS 360 Theater.