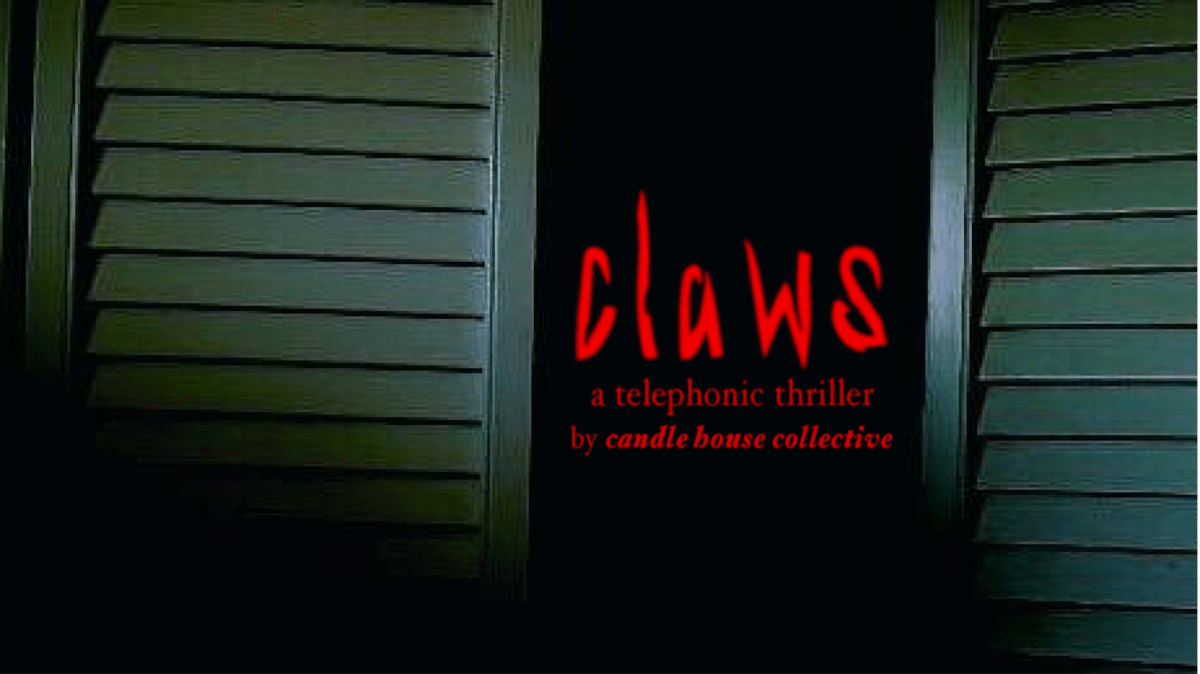 CLAWS from Candle House Collective at FIVARS in FEB 2021

There is a wave coming – of audio-based entertainment, that has seen podcasts evolve into elaborate radio plays, and radio stations turn to 3D audio. At FIVARS we are committed to supporting the evolution of the media so that we can transmit stories in engaging ways. CLAWS fits that bill perfectly. All-Access ticket holders (the first 20 in fact) are treated to this roughly 45-minute one-on-one journey by phone. You will sign a waiver, you will feel the dread of knowing that something chilling is about to happen over the phone, live.

We had the opportunity to ask creators Evan Neiden (EN) and director John Ertman (JE) a few questions about the project.

What lead to the creation of “CLAWS”?

EN: Most horror movies seem to agree that the scariest monsters are patient. They watch us, learn how we work, and trick us into believing they’re just in our heads. And more than anything, they wait until we’re alone. Isolation makes us more likely to doubt ourselves; to see danger where none exists, and to ignore when something is actually wrong.

Like many of us, my life during the pandemic was isolated – especially at the start. I found myself seeing danger everywhere and, as the result, I was too afraid to create anything. It felt like the fear was feeding on my creativity. When something finally did breakthrough, it was CLAWS – a thriller about a very patient (but very hungry) monster.

The world of CLAWS is an isolated one – a darkened bedroom where every creak and scratch could be a threat. But it’s also a reminder that even the hungriest of monsters have more trouble feeding on us when we’re not alone.

What was the production process for you and your team? What did you learn?
JE: The process was a journey of getting to know who ‘Danny’ was. Deconstructing a linear story into something elastic, able to organically evolve for each participant. It was also a rejection of typical black-and-white horror. Like a lot of the work Candle House does, CLAWS was an exercise in embracing chaos. You can’t create this work in a vacuum – the participant is as much a part of it as the character is. Analytical work is important too, but it all has to be destroyed when you pick up the phone…

How did you become an immersive media content creators, and why?

EN: I come from a background of traditional folk storytelling – parables passed down from in my family from one generation to the next. I find that there’s something intrinsically participatory about storytelling: in its purest forms, it’s adaptive, user-sensitive, and doesn’t labor under the pretense of a fourth wall. That, plus an early attraction to haunted houses and alternate reality games, made me realize that I wanted to do more than tell an audience a story – I wanted them to be a part of it.

JE: The thing that drew me to immersive theatre is what draws me to art in general: it’s all about creating a world worth exploring. Immersive work lends itself to a lack of bounds to the created world, which is supremely exciting for me. In terms of Candle House: I love Evan’s work and I love the collaboration we have. It allows me to direct voiceover and live theatre at the same time, which is uniquely suited to the parts of performance I’m most interested in.

JE: I think the way VR is growing in the USA is fascinating. I’m excited to see more live immersion show up in personal headsets, like group experiences that meld on-site and portable immersive theatre. Work that pushes boundaries in all directions.

EN: It’s no surprise to me that VR/AR is going mainstream very quickly here in the USA – it’s the inevitable new wave of entertainment. I have, however, been pleasantly surprised by the more theatrical projects I’ve seen on the inside of a headset – particularly those including live performances. Whether it’s a madcap one-person retelling of a Shakespeare play, a ghostly visitation based on a beloved Christmas story, or a heart-wrenching story of love and loss against a cruel, war-torn backdrop, I find the VR/AR work that centers connection to be most defining of the industry – both in the USA and beyond.

EN: A story is the conduit for a connection; not the other way around. That’s what storytelling is all about. But connection can’t be controlled or created manually – it’s organic, almost spiritual, and will only appear on its own. Focus on what you can control: share a story worth sharing, shape it as best you can, and let that story be a space for sparks to fly.

JE: The only way that immersive (or any) art works, is if we adopt a positive culture. In Candle House Collective, more than anything else, we’re committed to supporting one another at every level of our work. For me, Candle House brings new meaning to family, which is necessary to make the work as authentic as it is. As a director, I come into every room ready to listen as much as a guide, leaving part of every process open to adaptation based on what the artists bring to the table. I advise other creators to keep an open mind; prioritize love and support for those willing to devote their art to yours.

JE: Of course. While Candle House hasn’t done VR yet, I’ve recently been introduced to the world of potential that VR holds. I honestly think it’s the next dot-com boom, and that festivals like FIVARS help to take away the barriers around this exciting new medium.

EN: Not only do festivals like FIVARS show the ever-climbing potential of this industry; they’re also an opportunity to become familiar with the work of incredibly talented creators from all over the world. They’re critical opportunities for connection and meaningful exchange, and I’m glad to be a part of this one.

JE: I’m excited to share this work with you. I firmly believe in what we’re doing at Candle House Collective, and I’m grateful for festivals like FIVARS which are joining us in expanding the definition of what an immersive experience can be.

EN: We at Candle House Collective have been creating telephonic theatre since 2018, so the essence of our work was relatively unchanged by the pandemic. CLAWS was the first instalment of our 2020 “help!” collection – an anthology inviting participants to volunteer for the fictional “Etcetera Helpline,” helping callers with “life’s inevitable everything else.” We conceptualized The Etcetera Helpline in response to this global period of isolation – an eccentric reminder that help is always worth asking for, and that no two people need it in the same way.