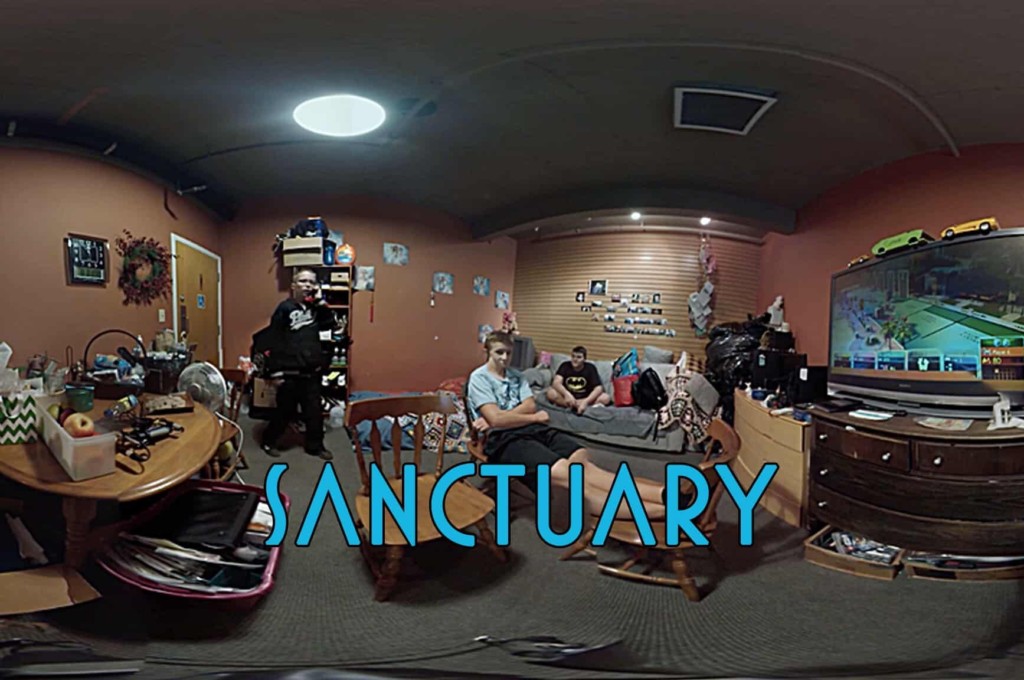 I have always believed that VR or its cousin 360 videography do not have to be full of bombast to make their entrance into the broader audience. In fact it is often the quieter, more nuanced experiences that truly underscore the power of this medium and it relationship with presence. Shivani Mulekar’s “Sanctuary” is one such piece – exploring the conditions of life for a refugee family in Canada and the simple day to day life living in a Church awaiting their fate.

These spotlights are designed to not only accquaint you with the stories themselves, but also the people making them, whose journey often as interesting as their work. Shivani Mulekar is a researcher and talent scout. She works independently sourcing stories and developing TV show concepts. Prior to being a VR filmmaker, Shivani worked with TV networks in India creating award winning TV series. She holds an MFA degree in Documentary Studies from Ryerson University. Sanctuary is her first project in VR.

Marie-Espérance Cerda is an award winning video producer (NextMedia DigiAward, Montreal Remix NFB-INA Prize Winner) and an accomplished photographer. She completed Ryerson’s Master of Media Production program, where she produced two immersive and interactive 360-degree virtual reality video journalistic reports. She has worked in West Africa with organizations such as Abode Youth Projects and throughout Canada as a video journalist for The Canadian Press, exploring the stories that make up cultures.

FIVARS had to opportunity to interview Shivani in advance of the world premiere of Sanctuary at FIVARS 2017:

Tell us what inspired the creation of your project?
Shivani Mulekar: Being an immigrant myself and living in Canada for nearly 10 years, I strongly believe in the issues of immigrants and refugees. When I learnt about the Juhasz family and the issue of sanctuary, it piqued my interest. The concept of sanctuary was new to me and I wanted to create awareness about the issue of undocumented immigrants. The use of 360-camera gave me an opportunity to immerse the audience right into the centre of the story. 360-camera gave me an effective tool to create spatial storytelling.

Tell us about how the production came together
Sanctuary was self-funded. It was made on a meagre budget and Vinit Rajan provided complete funding in-house. My friend Marie-Esperance generously supported me by sharing her camera as well as agreed to be the cameraperson for this project. I managed post-production independently. I learnt to stitch and used AutoPano to stitch the images. Editing was completed using Adobe Premiere.

What did you discover in the process of making this piece?
The biggest discovery during this process for me was realizing the importance of VR and its impact with spatial storytelling. 360-cameras change your complete perspective and take you way beyond the traditional rules of filmmaking. This filmmaking process was such an eye-opener in terms of what a technology can do to your storytelling and how it can impact in immersing your audience.

What would love to try next?
I would like to merge VR with AR to present my next documentary. I was exposed to the AR world of holoportation. If given an opportunity, I would like to develop my next project in VR and merge it with AR for its exhibition.

Do you feel there is a need/value to festival like FIVARS? Or will they eventually become a part of the regular entertainment landscape?
I believe festivals like FIVARS have a strong value in today’s VR market. The festival not only creates a breeding ground for upcoming VR artists to collaborate and exchange ideas but it also offers an opportunity to share each other’s work. Exchange of ideas is key for the future of VR.