FIVARS proudly presents the 2019 Official Selections. All are in competition and eligible for People’s Choice in Best Interactive or Passive Experience, Jury Prize and Impact Award. 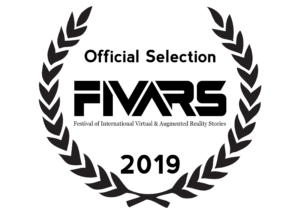 FIVARS proudly presents the 2019 Official Selections. All are in competition and eligible for People’s Choice in Best Interactive or Passive Experience, Jury Prize and Impact Award.

Soaring VR film in which the viewer sets off for a fascinating journey into space, visiting thrilling settings of current and future space missions.

The true story of a school shooting” is a powerful virtual reality experience produced by The Washington Post, based on an unforgettable front-page article by 2018 Pulitzer Prize finalist John Woodrow Cox.

A four-acts immersion into Manet’s famous painting ‘Bar At The Folies-Bergere’.

A personal journey through time to the last buildings of Bauhaus icon Walter Gropius: the Rosenthal factory am Rothbühl in Selb and the Glass Cathedral in Amberg, Bavaria.

A complete VR sailing race experience from both water and aerial perspectives, including graphic explanation, captain narration, and a near collision all with the beautiful Chicago skyline in the background.

Follow Sherpa Tenji as he attempts to climb Mt Everest without the use of bottled oxygen, something that only 175 people have done before.

In times when words did not divide men. When humans and animals were still one.EX ANIMA EXPERIENCE goes through chaos and calm, instant and ages in an timeless rush.

A group of young aspiring actors meeting on a rooftop in Hollywood to share their dreams, loves, and challenges as they try to make it in ‘the industry’.

Beautiful black and white cinematography depicts the fading art of the Wood Turners who craft beautiful unique toys, utensils and other objects by spinning wood.

In this 360 experience you are the bullet fired by a GNB policeman into the middle of a protesting crowd in Caracas, Venezuela. Inspired by true events.

The anti-hacker squad discovered the hacker virus during the first aid treatment of the infected ones, an anti-virus war is about to begin…

An exploration of women reclaiming their sexuality from the patriarchy. Experience the persistent barrage of verbal attack – cat calls to self-shaming – that women are exposed to daily. Watch as these women strip off those confines and emerge ready to truly be seen.

Ever wonder what it would be like to be trapped inside the soul of a drag queen?

Does a dream have the power to change you? Experience the dream of a Blackfoot man that impacted his life forever.

A single mother who grieves the loss of her only son moves into a new home that is haunted by the spectre of a child.

Walk a mile in her glittery pumps and experience what life is really like for the world’s oldest drag queen.

In a way never before seen, “tx-reverse” shows a collision of reality & cinema & draws its viewers into a vortex in which the familiar order of space & time seems to be suspended.

Growing up in a post 9/11 world, Naureen finds herself as the “other” and discusses how her “shade of brown” was not accepted.

A virtual tour of Frankfurt, Chicago and Los Angeles in 2049. This well researched vision of the near future truly puts you inside the fast forward button to participate in new approaches to civic life.

When Lupe, a Puerto Rican-American teen, meets fellow runaway Debbie, the Bowery’s punk scene and the Lower East Side is their playground. An animated ode to ’70s punk!

Made with a full body MRI scan users can walk around the life sized body, and real life motion-tracked sculptures, dive inside it to see its inner workings, as well as ‘animate’ the body by holding its hand to make the heart beat and lungs breathe.

The Holy City is an interactive exploration of faith set in Jerusalem and told in Extended reality.

Narrated by Geraldine Chaplin this experience allows you to unleash the memories trapped in the cave of La Garma, in Santander, untouched for thousands of years until it was discovered in 1995.

A Co-Production between CFC Media Lab, and OCAD University that explores a sequoia tree’s ecosystem through embodied perspectives of various species.

Pagan peak VR takes the player on a journey to the darkest corners of the human mind. The player finds themselves in a mysterious alpine cabin, captured by the Krampus killer.

Before the internet took over, before memes multiplied, there were windows of computer fantasy all over the world… courtesy of THE SCREENSAVER.

Some months from now, in a new ‘rule of law’ America, a remote prison camp brutally shackles together five inmates deemed enemies of the state.

The Netherlands is the drug capital of Europe. Marijuana is in the nation’s genes, coke enters the country through its harbors, and XTC is as Dutch as chocolate sprinkles.